Giving your child a name: appointing godparents: honouring grandparents: calling on "the village" for support 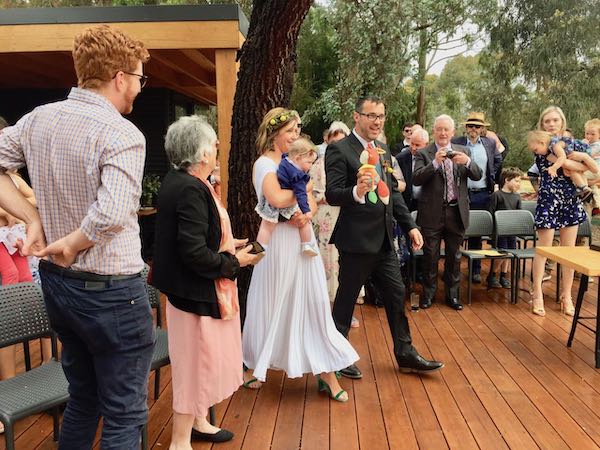 Naming Ceremonies existed in human culture long before Christianity or any of the major religions came on the scene. Every community has a ceremony to welcome a new child into the world, to give that child recognition, and to celebrate the birth of new life.

In Roman law, for example, a child was not a member of the family, or a citizen, until named in such a ceremony.

As the renowned scholar, Edward Schillebeeckx, tells us, a child born out of wedlock, the adopted child, or even the child born in wedlock, had no status in culture or law until the celebrant (in the days of ancient Rome, the father) had performed the ceremony. When Christianity became the official religion of the Roman Empire, the naming ceremony was replaced by the Christian Rite of Baptism.

Our best celebrants have developed a range of ceremonies to respond to the cultural and community need to welcome a child into the family and the world. Indeed Australian celebrants can take the credit for re-introducing the non-church and secular Naming Ceremony into Western Culture. The Australian initiative was taken up by New Zealand, and only recently has been introduced in parts of the UK and the USA.

The Naming Ceremony reminds all concerned of the great responsibility involved in bringing up a child, and recognizes and/or appoints those who will have an important role in the child’s development.

During the forty seven years (2020) since celebrants began in Australia (established 1973), the best celebrants have evolved from an original rudimentary Naming Ceremony to a developed cerermony of substance and meaning. It is possible to incrorporate a wide range of possibilities at the choice of the parents.

Music and song, personal family histories, poetry, prose, symbolism, wishes and “blessings”, and ritual gestures are all components available to the creators of a personal Rite of Passage for the newcomer to the family.

The development of the Naming Ceremony is one of the ways celebrants and supportive clients are contributing to the cultural development of our country. Rites and customs from all of Australia’s many cultures and ethnic groups can be incorporated into a Naming ceremony.

(Note: Namings can also be appropriate for older children and adults.)

Another initiative, for which Australian celebrants can take credit, is the recognition, for clients of European tradition, of grandparents in the ceremony. The place of “godparents” or “mentors” is judged as much more important in this society than it has been in the past, due to the often fractured nature of our many families. To commemorate the event, and after the ceremony is completed, the celebrant issues commemorative certificates to the parents, the godparents and the grandparents as a record.

Naming ceremonies are not just for non-churchgoers. Many people from various cultures, and especially mixed religions, believe a child should choose their value system only when they are of an age and maturity capable of doing so.

The Celebrant Centre has many resources available to help you plan your celebration and can provide laser printed commemorative certificates for all your special participants. Have a look at our range of unique ceremonial products online.

Even if your ceremony is low key, it often requires more time and organization than you can imagine. Ceremonies are like everything else in life, the more you put into them, the more you get out of them.